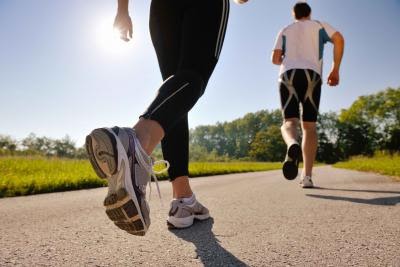 Have you heard of the 10% rule? It means not increasing your weekly running mileage by more than 10% per week, as doing so increases your odds of getting a running injury quite dramatically! Anyone surprised by this??

Unlike other sports that may be prone to traumatic injuries (for example twisting your knee playing football), running injuries tend to be related to overuse. This basically means pushing your body too hard, too quickly, for too long. If the tissues do not have enough time to recover, they overly fatigue.

Examples of running injuries that we see regularly are plantar fasciitis, achilles tendonitis, runners knee, ITB friction syndrome, among others. They are all treatable but:

Prevention is better than cure!

The best course of action is to prevent the injury from occurring in the first place, and one of the best things you can do is train sensibly – that means no massive shocks to the system!

Sudden changes in your training can lead to injury – examples of this being going from zero to hero – ie from couch potato to running most days a week. The body adapts best to gradual changes, so starting small and gradually build up will make you less prone to injury. Generally the guidelines are that once your total volume is at 8km per week, not to increase mileage by more than 10% total per week (known as “The 10% Rule”), and not to increase speed and volume within the same week. For example if you run 20 miles per week, and want to increase it, you shouldn’t add on more than 2 miles in the first week!

Now isn’t that alot more gradual than you thought?!!

It doesn’t mean you can’t mix it up though- you can put in some lower impact training such as swimming or cycling to improve your fitness while you are building your running, and satisfy your New Year’s zeal!